Brandscheid – The Verdun of the Eifel

The following story will give a perspective about the battle fought for the village of Brandscheid in February 1945. The small village in the Eifel region was nicknamed “Westwall Village”, due to its strong Siegfried line fortifications that were built in the years prior to the war. These fortifications had an effect that the strategic village was later also called “the Verdun of the Eifel” as a result of the heavy shelling Brandscheid attracted for a period of almost five months while it remained in German hands.

Situated on the southern slope of the Schnee Eifel ridge, Brandscheid overlooked the larger town of Bleialf, and therefore the village was protected by concrete pillboxes and dragons’ teeth as part of the Siegfried line in this area. When the Americans dashed through Europe in the summer of 1944, elements of the 4th US Infantry Division first crossed the German border at the village of Hemmeres on 11 September 1944, and three days later the infantry regiments found themselves heavily engaged with the enemy all along the Schnee Eifel ridge. Stiff enemy resistance prevented the Americans from capturing Brandscheid after several attempts were made back in September. After the fighting died down in the following months, the village lay in full view of the Americans who were positioned all along the opposite ridge and in the town of Bleialf. Strong artillery concentrations and daily harassing fire left the village in ruins, and on top of that when the battle of the Bulge started in December 1944, the village drew even more attention from US artillery and air raids. As one GI later recalled when travelling through this particular area in February 1945, he stated it was one of the filthiest places he encountered during his journey through Europe. The melting snow had uncovered the dead bodies of both German and American soldiers who were scattered all along the countryside. The roads were littered with wrecks and dead horses. In the few standing houses that remained human feces lay in every room. The fighting here took place in such small quarters that to leave the cover of a building was an invitation to die.

When the Battle of the Bulge had come to an end, the VIII Corps, which was a part of the Third US Army was ordered to go beyond the Schnee Eifel ridge and take the vital road network of Prüm. The main thrust of the VIII Corps into Germany was done by the 4th and 90th US Infantry Divisions. The German units defending the area had all previously been engaged in the battle of the Bulge. For instance, the 326th Volksgrenadier-Division who was defending this sector had suffered dearly in the northern shoulder of the offensive, and what remained of the division was merely a battalion sized unit. It goes without saying that the second penetration into Germany was met with only light opposition, and by the 2nd of February the town of Bleialf was captured by elements of the 12th US Infantry Regiment. With Brandscheid and the Schnee Eifel ridge now again in sight of the Americans, a hasty plan was made to capture these objectives and keep up the momentum of the advance. When in the very early hours of February 4th a strong American patrol probed the Siegfried line fortifications in the vicinity of Buchet, the men caught the Germans unprepared atop the Schnee Eifel ridge. Just as in September, the division commander ordered an immediate attack. By 0600 the 1st Battalion of the 8th US Infantry Regiment climbed up the slopes of the Schnee Eifel in complete darkness. An hour later the 1st Battalion of the 22nd Regiment joined in a few hundred yards to the south. As the battalions reached the road atop the ridge, follow-up battalions turned left and right and cleared a line of pillboxes all along the Schnee Eifel road against almost no opposition. The Americans had taken 128 enemy prisoners against only one casualty of their own, and as the day ended the 4th Infantry Division had formed a firm foothold on top of the ridge.

On the following morning, the 5th of February, the 22nd Regiment lay just short of the crossroads north of Brandscheid but seizing the crossroads seemed a difficult job. Just as in September the Germans had strengthened their positions, and the crossroads of Meisert were strongly defended by elements of the 326th Volksgrenadier-Division. Under increasing artillery and mortar fire it took the 1st Battalion of the 22nd Regiment all morning to capture the crossroads and the 11 pillboxes in the immediate area. With the crossroads now firmly in American hands, a good position was established to attack Brandscheid itself. Two companies were appointed for the attack, supported by 10 tanks and seven tank destroyers. While the infantry left the cover of the woods, the tank destroyers fired point blank on the enemy pillboxes, and what couldn’t be accomplished in September, the men of the 1st Battalion did in only three hours: Brandscheid was in American hands, at the cost of “only” 43 casualties.

Thus far the 90th US Infantry Division of the VIII corps had only participated in the fight with a fire demonstration against the village of Habscheid the previous day with the goal of distracting the Germans from the attack made against Brandscheid. With the village now in control, the 90th Division was ordered to take over the positions of the 22nd US Infantry Regiment. During the night, when the companies in Brandscheid were relieved by elements of the 358th Infantry Regiment, disaster struck. From the enemy viewpoint the loss of Brandscheid had collapsed the left flank of the 326th Volksgrenadier-Division. Therefore, a hastily formed unit of engineers, artillery men and remnants of an infantry battalion were ordered to take back the village. A force of about 450 soldiers attacked from the south during the early hours of February 6th. The attack couldn’t come at a more convenient time for the Germans as the men of the 22nd US Infantry Regiment were just about to be relieved by elements of the 90th Division. The soldiers of the 358th Infantry Regiment had spent hours and miles walking in the dark, cold and rainy night and when they arrived in the village at 0430h they were soaking wet. When the relief of the 22nd Regiment was in full progress, the Germans struck. After the positions of K Company of the 22nd Regiment south of Brandscheid had been overrun, the fighting moved to the centre of the village. A counterattack of L Company, who was just relieved, managed to throw the Germans out again, this time for good. As the morning came to an end about 150 prisoners were taken and the situation was back under control, although at a heavy price. The 3rd Battalion of the 22nd Regiment counted 12 men killed, 98 wounded and 38 missing. Some of the missing men were cut-off in pillboxes just outside the village, however they were able to re-join their companies at a later time. The 358th Regiment lost nine men killed.

Although the 90th Division would struggle for days against the heights south east of the village, the battle for Brandscheid was finally over. It had been a thorn in the eyes for the Americans for almost five months. With the possession of the village the American advance towards Prüm could begin. Around noon on February 6th, the 22nd Regiment set in their attack against Sellerich, Herscheid and Hontheim, and was able to capture these villages by the end of the day. The swift advance through the Schnee Eifel defenses meant that the city of Prüm could be captured a week later.

The documents below are a testimony of the battle for Brandscheid in 1945. Leutnant Metzscher served in the Schwere Werfer-Regiment 14 (Heavy Rocket Regiment 14) and in the early morning of February 6th he was to lead a German infantry attack on the village of Brandscheid. He was killed in action in the village around 0730h in the morning during the time L Company of the 22nd US Infantry Regiment counter attacked. His remains were buried by the Americans in Recogne, Belgium. The letters below are written by his commanders and addressed to his parents. They describe the circumstances of his death in the early morning of February 6th. 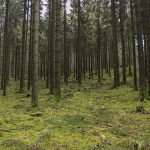 Prev Oh, so young
Next Missing in action at Dausfeld 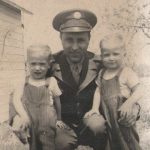 You can enable/disable right clicking from Theme Options and customize this message too.